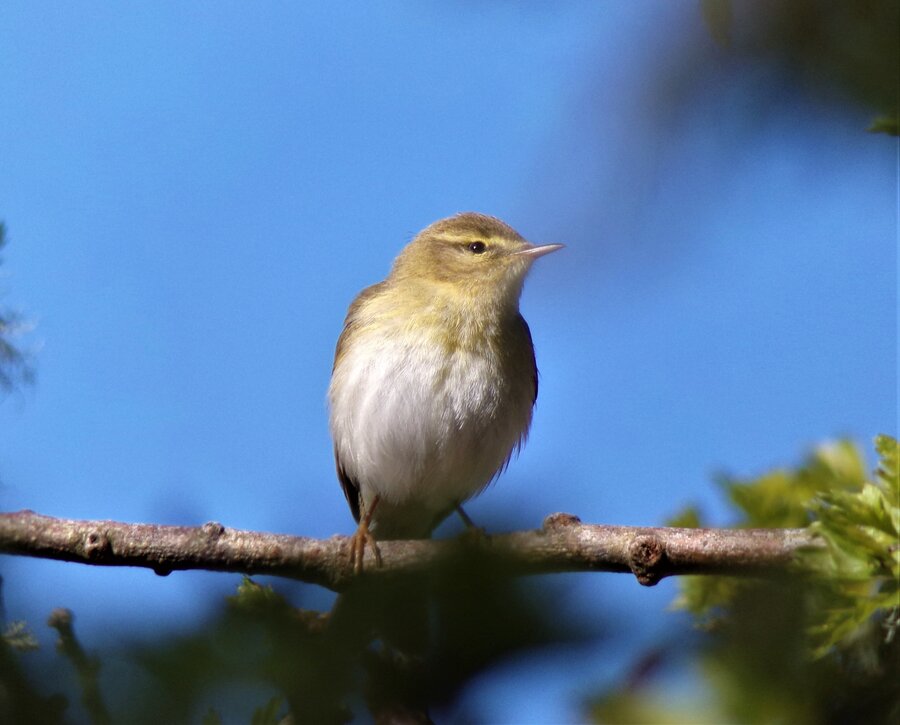 Many thanks to those of you who keep me posted with your latest observations. If anyone would like to report unusual sightings of birds or other wildlife on Tiree, please contact me - john.bowler@rspb.org.uk.

January brought a mixed bag of weather, with colder drier spells interspersed with warmer wetter spells, culminating in a weekend of storms at the month-end. Frequent gales resulted in big sea swells for much of the month, causing a notable wreck of Puffins and Little Auks, which would have struggled to feed in the rough waters further offshore. The rare North American birds from December remained as they were, including the lone Todd’s Canada Goose in with the Barnacle Geese in central and west Tiree and four Ring-necked Ducks, which commuted between Loch Bhasapol and Loch a’ Phuill. Northerly winds brought in a few “white-winged” gulls from the Arctic including young Iceland Gulls at Sorobaidh Bay (5th) and at Hough Bay (14th) and young Glaucous Gulls at Balephetrish Bay (11th) and Hough Bay (14th). Other unusual birds included a Siberian Chiffchaff perhaps trying to overwinter at Balephuil (7th), up to 7 Black-tailed Godwits wintering at Loch a’ Phuill, an adult White-tailed Eagle at Beinn Hough (12th) and up to 2 Common Scoters all month off Hough Bay with five more off Milton (21st).

The Big Garden Bird watch weekend on 29th-30th January found good numbers of birds visiting garden feeders in between the gales, including large numbers of House Sparrows, Chaffinches and Starlings, with the odd Dunnock and Reed Bunting also reported. The January goose count (11th-12th) found a total of 6,291 Barnacle Geese, as well as 814 Greenland White-fronts and 2,943 Greylags, plus 128 Whooper Swans on the lochs, 3 Pink-footed Geese, 2,370 Golden Plover and 2,710 Lapwing. As ever, the beaches were busy with wintering shorebirds including an impressive count of 270 Ringed Plovers at Sorobaidh Bay (17th)

February continued the stormy theme from January with frequent gales. These continued into March, but the second half of the month saw calm, dry sunny conditions prevailing under a blocking high pressure system. Spring migrants were generally quicker to arrive than last year, as a result of the settled weather later in March. However, there was still a big return of adult Lesser Black-backed and Black-headed Gulls in February despite the gales. Numbers of Pied Wagtails, Skylarks and Meadow Pipits also built up over the period, whilst many birds began to display once more in March including Lapwing, Oystercatcher and Skylark on the grasslands and Snipe and Redshank in wetter areas. Other returning migrants in March included our earliest ever Chiffchaff at Balephuil (3rd) with 7 more by the month-end, at least 18 Goldcrests (from 15th), 3 Manx Shearwaters off Hynish (15th), an early Woodpigeon at Balephuil (16th), the first 5 Linnets at Balinoe (20th), 2 Black-tailed Godwits at Loch a’ Phuill (21st), 6 scattered Wheatears (23rd), a Sandwich Tern at Balephetrish Bay (24th) and 2 White Wagtails at Traigh Bhi (27th).

Rarities included the long-staying trio of Ring-necked Ducks at Loch Bhasapol and the Todd’s Canada Goose in with the Barnacle Geese in north and west Tiree throughout. February brought a few more storm-bound Little Auks and Puffins, plus the odd juvenile Iceland Gull and Glaucous Gull and a Rook at Heylipol (8th). A sub-adult Golden Eagle toured the island for much of March, whilst in the same month an adult White-tailed Eagle was photographed at Balephetrish (14th) and a subadult White-tailed Eagle was at Balinoe (28th), Ceann a’ Mhara (30th) and Caoles (31st). A first-winter Ring-billed Gull from North America was at Hough Bay (22nd-29th) and Tiree’s first-ever Scandinavian Rock Pipit was at Balephetrish Bay (31st).

An all-island count (7th&9th March) found a record 6,580 Barnacle Geese, as well as 945 Greenland White-fronts, 2,712 Greylags and 1 Pink-footed Goose. Golden Plover flocks started building up once more with 6,450 at the Reef (23rd). Whooper Swan passage was noted on and off throughout March. Frogs were widespread on damp nights and the first Small Tortoiseshell butterfly and White-tailed Bumblebees emerged very early (5th). The first moths of the spring also appeared on milder nights from mid-March, mostly involving Red Chestnuts, Hebrew Characters and Clouded Drabs but also a very early Double-striped Pug (23rd).

April was unusually calm, dry and sunny with only a few wet days. The calm conditions meant that spring came earlier than normal for much of our wildlife. The first Corncrakes returned to Mannal (18th), with calling birds widely scattered around the island by the month-end. The Barnacle and Greenland White-fronted Geese departed en masse for their staging grounds in Iceland early on 9th-10th with most of our wintering Whooper Swans departing at the same time. Clear skies meant that many migrating birds did not need to stop off on Tiree on their way north, so the peak count of Black-tailed Godwits was only 263 (20th) and there were no large influxes of Redwings, although Golden Plover numbers peaked at an impressive 7,700 at the Reef (7th). There was an obvious arrival of Greenland Wheatears from 22nd plus small influxes of Woodpigeons and Collared Doves.

The calm nights were good for moth-trapping, with many early spring species recorded, whilst butterflies too were quick to emerge with occasional Small Tortoiseshells and Red Admirals, an early hatch of Green-veined Whites and a very early Orange-tip at Balephuil (29th). Many queen bumblebees were on the wing on sunny days throughout the month, although no Great Yellow Bumblebees have been seen yet. There was also a lot of activity offshore later in the month with frequent feeding frenzies of hundreds of Manx Shearwaters, gulls and auks feeding on small fish brought to the surface by large “super-pods” of hundreds of Common Dolphins. Minke Whales were widely spotted in the calm conditions together with the very first Basking Sharks and a rare pod of Risso’s Dolphins off Hynish (29th), whilst the two remaining west coast Orcas (“John Coe” and “Aquarius”) were seen by a lucky few at the month-end.

Corncrakes returned in good numbers and were calling all around the island by the month-end. The annual night-time census will be completed in June to reveal how numbers compare this year with the count of 285 calling males in 2021.

The breeding season was in full swing for most of our birds. Garden birds did well, despite periods of cool wet weather with many broods of Blackbird, Song Thrush, Stonechat and House Sparrow noted, whilst the mass emergence of Starling fledglings occurred two days earlier than normal on 28th.There were also many Lapwing, Oystercatcher and Redshank broods in the grasslands, and the first Common Gull and Black-headed Gull chicks emerged in their scattered colonies at the month-end. There were also brief visits by up to 3 Cuckoos and a few breeding pairs of Common Redpoll, Goldfinch, Whitethroat and House Martin. Arctic and Common Terns were also on eggs by the the month-end. Should anyone out walking / running find themselves being mobbed by waders or crowds of terns and gulls, please bid a hasty retreat. The eggs and young broods are very vulnerable to attack by gulls and crows, which can sneak in while the parent birds are busy trying to drive you away. Please also watch out for young birds, as well as livestock crossing the roads at this time. Many thanks!

May brought a nice mix of scarcer migrant birds including our first ever Stone-curlew at Balinoe (11th), our first “red” adult male Common Rosefinch at Balpehuil (20th) followed by a female Red-breasted Flycatcher there (24th) and a female Blue-headed Wagtail at Balevullin (18th), although sadly all of these birds put in only brief appearances. Other good birds included two drake Garganey at Loch Bhasapol (19th) followed by a drake Scaup there (23rd-31st), an immature Golden Eagle at Milton (6th), a Coot at Heylipol Church lochan (1st), a Wood Sandpiper at Balevullin (20th), juvenile Iceland Gulls at Loch a’ Phuill (2nd-5th) and Kilmoluaig (2nd), a juvenile Glaucous Gull at Balevullin (16th), a female Redstart at Balephuil (17th), Lesser Whitethroats at Balephuil (7th) and at the Glebe (17th) and a Garden Warbler at Balephuil (19th). The last week of May saw the emergence of the first Four-spotted Chaser Dragonflies and Common Blue Damselflies. Butterflies such as Green-veined White, Large White and Small Tortoiseshell all flew on warmer days. Moth catches were small in the cool conditions and no Great Yellow Bumblebees have been spotted yet. Offshore, there were regular sightings of pods of Common Dolphins, together with the first Basking Sharks, whilst Otters were seen regularly on the lochs and shores, and large groups of Brown Hares boxed in the fields.

Three night-time counts around the island revealed a preliminary total of 270 calling male Corncrakes. This figure is slightly down on the 285 birds recorded in 2021. The large population on Tiree represents around a third of all the Corncrakes in Britain and is a result of all the Corncrake-friendly management put in over the years by the islands’ crofters and farmers.

With low pressure in charge for much of the time, June remained unusually cool and wet. Despite this, our breeding birds generally appeared to do well. There were plenty of Lapwing, Oystercatcher and Redshank chicks around the island, plus big numbers of young Starlings. Smaller birds, such as House Sparrow, Stonechat, Linnet, Song Thrush and Blackbird, appeared to have another good breeding season, whilst the first broods emerged of Wren, Wheatear, Willow Warbler, Linnet and Twite. Seabird breeding success generally looked good so far with increased numbers of breeding Kittiwakes, Fulmars, auks and Shags on the cliffs at Ceann a’ Mhara, lots of fledged Common and Black-headed Gulls and there were many Arctic Tern chicks in the colonies at the month-end.

Best birds were single Little Stints at Vaul Bay (5th) and at Sorobaidh Bay (7th), two Curlew Sandpipers at Hough Bay (5th), a Wood Sandpiper at Baugh (6th), a drake Scaup at Loch Bhasapol (2nd) and a singing Garden Warbler at Vaul (5th). Scarce breeding birds included two pairs of Whitethroats, two pairs of Goldfinches and a bumper 12 pairs of Common Redpoll, plus the odd late Cuckoo, Spotted Flycatcher, Whinchat and Woodpigeon. A pair of Dunnocks raised young at Vaul, only the second recorded pair to do so on Tiree and a juvenile Robin appeared at Balephuil (27th). Up to 6 Whooper Swans summered on the island, as did at least 10 Great Northern Divers and a handful of Turnstones.

Common Blue butterflies, Four-spotted Chaser dragonflies and the first queen Great Yellow Bumblebees were all noted on the wing on sunny days and numbers of moths increased towards the month-end, with two Hummingbird Hawkmoths recorded on the machair (19th and 24th). There were several sightings of cetaceans around the coast and thousands of By-the-Wind Sailors came ashore (from 24th). Please watch out for wildlife and livestock when driving on Tiree’s roads, especially at night and during periods of poor visibility. 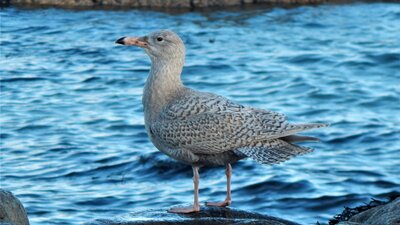 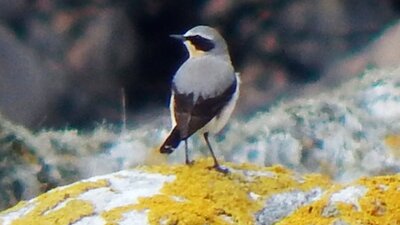