An Turas is in, and of, the landscape and the place ... it is that which gives it its meaning. It is both a building and an art work, a landmark and a symbol

Tiree Art Enterprises (TAE) was established in 1992 and after holding a number of annual exhibitions, art classes, workshops and an outdoor sculpture exhibition decided, at the end of the 90's, that there was a need to diversify and to plan a project that would mark the 'new millenium' on Tiree.

This led to us commissioning a feasibility study which involved questionnaires, personal interviews and consultations - and eventually to the publication of the report in 1998. The committee, led by the enthusiastic commitment of their chairman, the late Brian Milne, formed a project brief "to produce a visually pleasing design which would be sympathetic to the landscape, provide shelter and leave a lasting experience of a visit to Tiree. They invited Robert Steadman, a well respected Scottish architect with experience of working in the islands, and Scottish artist Frances Walker - a founder member of TAE and a long-time householder on the island, to recommend an architect and lead artist. The design team were appointed after a selection process and local consultation. 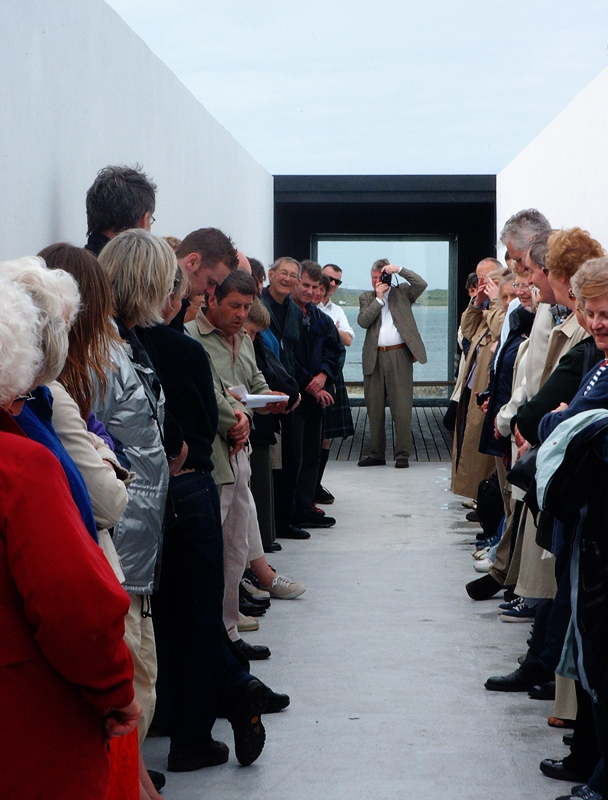 An Turas is the result of a collaboration between two of Scotland's most innovatived young architects and a group of artists - a medling of architecture and art. Put in very basic terms An Turas is made from three distinct sequential parts - a white walled corridor providing shelter and open to the sky and rain - a black, dark open ended box providing shelter from the light but with slats on the lower sides allowing the rocks below to be seen - and finally a reflective glass cube where, in silence, the visitor is offered wide views across Gott Bay. At various stages along its length the structure abstracts the natural elements in diverse ways, providing the visitor with an ever-changing experience.

At the very beginning of this collaborative project, the appointed group of artists and architects resolved to create a work that would, for its audience, be unique and elemental in visual, physical and temporal terms. A work that would be totally unified (physically and conceptually) in respect of its art and architecture content; a work related to and sympathetic to the site, topography and elements of Tiree; a work of individuality, epic in scale, aesthetically beautiful and of contemporary and Scottish cultural significance.

In researching our subject, we looked at, visited and photographed a broad spectrum of Tiree’s architecture (both ancient and modern). We explored the island thoroughly, walked through varieties of landscape and seashore observing the diminutive and the immense. We viewed part of the island from the seaward side and from the aircraft - noting views, elemental meeting points, geological features, man-made and weather-induced interventions. Also important were the micro cultures of lichens and mosses, the stratification of the gneiss, the composition of the machair and the sand and pebble beaches from which we collected samples of material.

The visual richness and flatness of the landscape, enormity of the sky, and sound, touch and smell of the elements, and the composition of the surfaces below our feet were particularly noticeable. This research and the simple elements of Tiree formed our palette and vocabulary for the creation of An Turas. At an early stage of our deliberations the undulating stone dyke and underlying bedrock were identified as essential site assets to contextualise and build our concept around.

An Talla is situated adjacent to the Cal- Mac booking office and being gaelic for The Journey, An Turus is an award winning arts project. Walking through it gives the complete island experience from the impression of a pier to a black roofed house, with vistas of shore and sea.

The building won the prestigious “Scottish Building of the Year” award in 2003. No admission charge and well worth a visit.