ADVICE FOR EVERYONE USING THE ISLAND'S ROADS 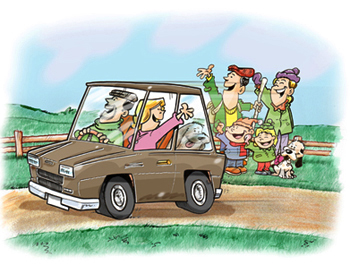 Most of the roads on Tiree are single-track. To the mainland eye, they can look delightfully quiet. In fact, all island life is here: lorries delivering feed, crofters carting seaweed, cars rushing to make the ferry, bicycles, farmers moving their animals, joggers, walkers and horses with their riders. Everyone with an equal right to use the public highway. 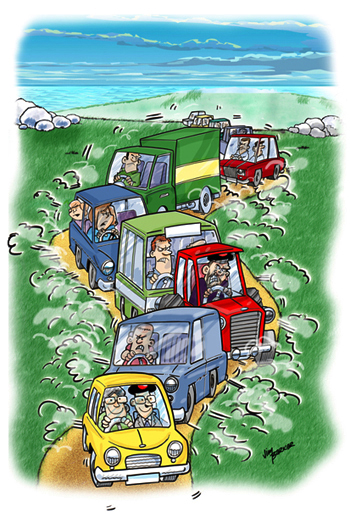 All roads on the island carry the national speed limit so be aware that some people may be driving faster than others. You should always allow faster vehicles to overtake. On single track roads you should pull into or stop at the next lay-by to allow the faster traffic to pass. Despite their obvious limitations, Tiree's single-track roads usually work pretty well, with an elaborate and courteous 'dance' between islanders that are used to the roads and used to each other. The 'Tiree wave' and smile is one of the glues that holds our community together.

On Tiree, most emergency services - the ambulance, fire service and coastguard - are staffed by volunteers. Along with the island's doctor and nurses, they use their own vehicles during emergency 'call-outs', driving with their headlights on and their hazard warning lights flashing. If you see such a vehicle, pull over as quickly as you can at the next passing place. 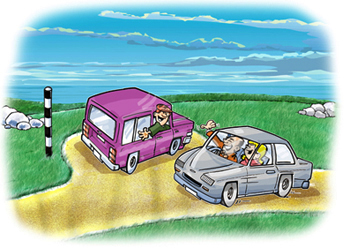 Long straggles of cyclists can be frustrating for drivers! If a car is coming towards you, take your turn to wait on the left side of the road at the next passing place. Don't try to cycle past a moving car on the road between passing places. It is not safe. And don’t be tempted to continue cycling on the verge – many roads have concealed drainage channels. The sound of the Tiree wind in your ears will often muffle the sound of traffic behind you, so keep your eyes peeled. If a car is approaching from behind, continue to the next passing place and pull in to the left. This is safer than stopping immediately onthe verge, which is often uneven. Tiree may be a peaceful Hebridean island, but please use bicycle lights and reflective clothing after dark as you would on the mainland. 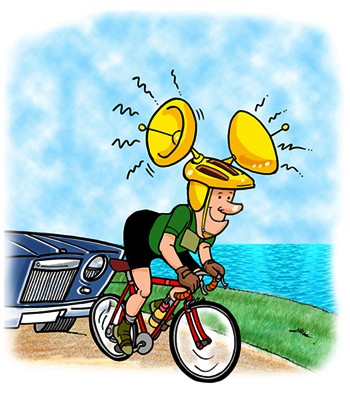 The recommended safe passing distance between a car and a bicycle is 1.5 metres (5 feet), ideally more – especially on windy days or on uneven roads. Single-track roads do not allow enough space for this. Car drivers and cyclists should therefore wait at a passing place rather than trying to squeeze past each other on the road. Driving past a moving cyclist on a single-track road would now be regarded by the police as dangerous driving. If a cyclist has failed to stop at a passing place, the driver should stop in the road to let them past safely. Also, be aware that cyclists going into a strong wind often can't hear traffic behind them; car drivers may therefore wish to sound their horns briefly to make sure they have been noticed. When driving, try to stay in the middle of our single-track roads. Both the verge and the fragile edge of the tarmac are easily damaged. 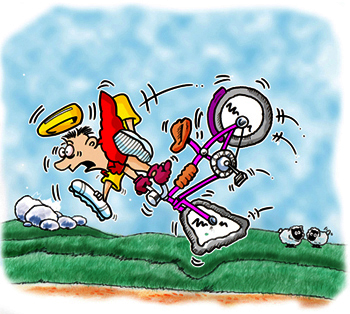 If a car approaches, please move onto the verge to give the passing vehicle as much room as possible. Be careful: there are more ditches under the long grass than you might think! If you are walking in a group, it makes sense to move to the same side. And when out at night, it is best to wear bright clothing and shine a torch. 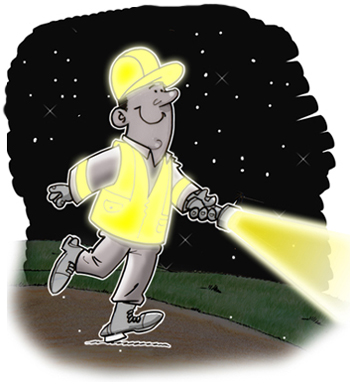